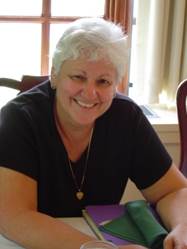 Joan, a 1966 graduate from Bridgewater State College, has been involved in coaching for 17 years.  From 1968 through 1974 Joan coached field hockey and softball.  She returned to coaching in 1983 after the birth of her daughter and, over the next 10 years, her teams qualified for the State Tournament eight times.  Her regular and tournament season records show 131 wins, 91 losses, and 51 ties.  She has also been an active member in the Massachusetts Field Hockey Coaches Association and the South Sectional Field Hockey Association.

In addition to her teaching and coaching career at Bridgewater-Raynham Regional High School, she has been involved in youth softball where she coached from 1980-1991.  Most recently Joan has been associated with the instructional and competitive programs of the Youth Softball League.  She has also been involved as a coach in the “Futures Program” of the USFHA and on the selection committee for the Bay State Games Coastal Team.

In 1991 she was named “Coach of the Year” for the Globe All-Scholastic Division I Field Hockey Team.