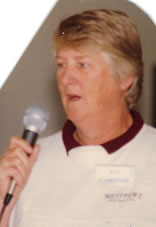 Her teams have won league championships in field hockey, basketball, volleyball, and softball, as well as a South Sectional Championship in softball.

Joan’s coaching skills and dedication to girls’ sport has been recognized on many occasions.  Somerset High School, where she earned 15 varsity letters as a player, presented her with the Babe Ruth Sportsmanship Award.  She has been inducted into the Somerset High School Athletic Hall of Fame.  While a player at Western Kentucky University, she was presented the Top Player Award by the Western Athletic Association.  The Boston Globe named her the Volleyball Coach of the Year once and the Softball Coach of the Year twice.  Joan has also been named the Coach of the Year in Volleyball and Softball by the Mayflower League on several occasions.