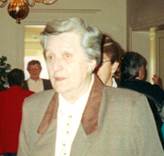 Joan Mussmacher, a graduate of Sargent College, is a professor of physical education at Norwich University, Northfield, VT.

Her involvement in WomanSport goes back to 1955 when she was the girls’ varsity basketball coach at the Julie Billard High School.  She then moved back to Natick High School where she coached field hockey, basketball, and softball from 1959-1972.  In 1972, Joan moved to Vermont College, Montpelier and coached varsity field hockey and varsity basketball.  From Vermont College, Joan moved to Norwich University where she instituted the women’s intercollegiate athletic program.  She is currently a member of the University Athletic Conference.  She was also the head coach of women’s basketball from 1972-1974, women’s field hockey from 1972-1985, and men’s tennis from 1978-1984.  During the ‘70’s and ‘80’s, Joan conducted clinics in field hockey, basketball, and softball for local high school female athletes.  Joan comes from that era when win/loss records were not kept for women.  She did, however, have at least a .500 record overall.

Her primary league affiliations have been the ECAC, NCAA Division III.  Joan was also active with the Northeast College Field Hockey Association that no longer exists.  From 1963-1965, Joan was the VT state chairperson for GWS.  In 1964 she was the VT state delegate to the first National Institute of Girls & Women Sports.  In 1968-69, she was the VT DGWS Basketball chair and in 1974, she served as the VT delegate to the ECAA for College Women.  In 1995, Joan was a speaker at the “Women in Sports Leadership” Conference for VT high school girls, sponsored by the VT State Principal’s Association.

Many local and national organizations have recognized Joan for her contributions to WomanSport, including: service award from the VAHPERD (1970), the NECFHA All-College Coach, Division B (1977, 1978), the ECAC Certificate of Appreciation for contributions to women’s athletics (1985), and the Vermont College Alumni Association Foundation Award for contributions to the College (1990).  She was inducted into the Norwich University Athletic Hall of Fame with the first group of women inductees in 1994 for her work as a coach, teacher, and administrator.