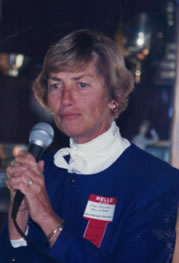 Joan retired from teaching and coaching in 1991.  During her 37 year career she coached field hockey, basketball, softball, and tennis.  She was an active official and served as the Chair of the CT Central Board of Women Officials.  As a member of the Connecticut Interscholastic Athletic Conference, she served on many of their sport committees.

Joan has been recognized by the Connecticut High School Coaches Association (CHSCA).  She was named Coach of the Year several times: Field Hockey (1975), Tennis (1985), and Farmington Valley Herald Coach of the Year in 1974.  She was inducted into the Connecticut High School Coaching Association Hall of Fame in 1991.  Her students awarded her the Student Council Citizen Service Award for 1991-1992.  In 1984 she was presented the CCIL Merit Award.