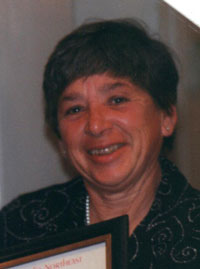 Judith F. Groff, Assistant Professor in Education at American International College, is assistant athletic director and head coach of women’s softball.  She began her career as a coach of field hockey, tennis, lacrosse, and basketball, posting winning records in all sports.  From 1969-1980, she was a USFHA official and head coach for women’s basketball at American International College, Springfield, MA, from 1969-1973.  In 1974 she started the volleyball program which she coached until 1988.  In 1969 she started the women’s softball program which has evolved from a NCAA Division III status into a Division II national power.  She has also worked summer camps in the Adirondacks as a swimming instructor and youth counselor.

Her team records are outstanding:  softball 689-349-3; volleyball: 274-17 (1977-1988).  She has posted 25 winning seasons, 15 straight, leading the softball team to the NCAA Regional Tournament in 10 of the last 15 years, including seven straight seasons.  She has participated in five ECAC tournaments, winning the tournament in 1986, 1988, and 1991.  Her teams have posted 30 or more wins in each of the past 15 seasons, averaging 34 wins per season since 1984.  She is ranked fourth among NCAA Division II all-time wins leaders and ranked 18th among all-time leaders regardless of division.