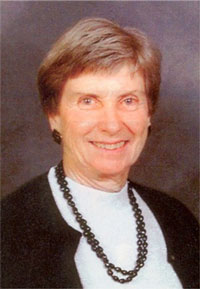 Julie, for most of her professional career, was involved at the collegiate level as a coach of field hockey, skiing, tennis, squash, volleyball, and golf.  She has also officiated golf, field hockey, lacrosse and volleyball.  During her retirement she continued as an active official of golf and field hockey.  This is her 38th year as a field hockey umpire.

She has officiated for the Rhode Island Interscholastic League, and has been affiliated with the USFHA, RIBFHO, USLA, USVBA, and the USGA Junior Girls’ Committee.

Julie officiates each year for the USGA at the National Junior Championship.  She is a clinician for junior golfers in Rhode Island at clinics sponsored by RIWGA.  She is the founder and organizer of the Junior Girls’ Tri-State Golf Championships.

Julie also works for the RIWGA as Director of Education and Rules Official for all tournaments sponsored by the Association.

Julie has been honored many times for her contributions to women’s sports: Words Unlimited Female Athlete of the Year (1985), honorary member of RIWGA (1987), Bill Crowley Award (1999), Rhode Island Golf Hall of Fame Inductee (2001), and International Scholar Athlete Inductee (2001).  She has been featured in an article in New England Journal of Golf (summer, 2002) and in Golf Week (March, 2003).