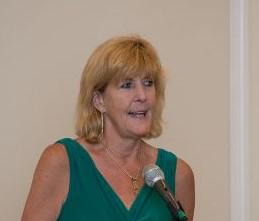 In 1981 Julie Mulvey began her career at Massasoit Community College (MCC) as the women’s basketball coach while she completed her student teaching in Brockton, Massachusetts.  With the exception of a year in South America pursuing a professional basketball career playing in Venezuela for Club Petroleras and a few years to raise her children, Julie was a pillar and a game-changer at MCC until her retirement in June, 2020.

Mulvey earned her bachelor’s degree in 1981 from UMass-Amherst and later completed her master’s degree at Bridgewater State College in physical education.

While at UMass Julie was an integral member of the women’s basketball team, earning All-American accolades her senior year. She still ranks in the top 10 in a number of statistical categories including eighth in scoring, totaling 1,406 points.  She was inducted as part of the UMass Athletics Hall of Fame, Class of 2013.

“I’ve always advocated for equality for girls and women in sports. When I graduated from college, I volunteered in my town for the girls’ basketball program, assuring that they had  equal opportunities. I ran camps, clinics and training sessions for both players and coaches.”

While at MCC, Julie continued to volunteer in her community.  She began a girls’ basketball program in Halifax equivalent to the boy’s program and while president of the girls basketball association, she introduced a competitive travel team program.

She was also president of the Silver Lake Booster’s Club Julie’s tenure at Massasoit Community College goes beyond coaching.   At MCC she worked on the Title IX committee and worked regionally with the National Junior College Athletic Association (NJCAA) serving on a number of different committees. She also served as the Women’s Athletics Regional Director for Region XXI, was on the National Women’s Basketball Committee for Division III and chaired the National Sports Eligibility Committee for the National Junior College Athletic Association.