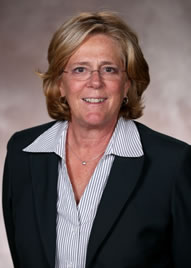 Originally from New Hope, PA, Julie spent the early years of her career at the University of Pennsylvania, Philadelphia University, Haverford College, and Colorado College. Julie is currently a Massachusetts resident serving as an Associate Professor and the Department Head and Director of Athletics, Physical Education and Recreation at MIT.  She has held this position since 2007.

At MIT, Julie directs a department that supports one of the most comprehensive athletic programs in the country with 33 intercollegiate teams, including a Division I rowing program that has its women competing in the Patriot League.  She is a noted speaker and has presented at NACDA and NCAA conventions as well as the National Association of Collegiate Women Athletic Administrators, the Women’s Coaches Academy, and the NCAA sponsored Women’s Leadership Symposiums.  Under her leadership, MIT has finished in the top-10 NCAA Division III programs in the country in each of the last four years, including 8th in 2014.

“I have benefitted from having wonderful women coaches and role models in my life who have taught me many lessons beyond the skills and strategies of competition.  The lessons and values gleaned from being on a team – commitment to purpose, perseverance, setting goals, leadership, competitiveness, determination – to me, are genderless. I am fortunate to be in a position that I can continue to promote and give back to others in learning and by sharing those same values and lessons.”