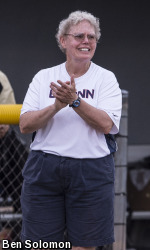 Karen is the head softball coach at the University of Connecticut.  In 1980-1981 she held a similar position at Nichols College in Dudley, MA.  Her teams have amassed a record of 371-137-3 during the years since 1984.  She has had eleven consecutive winning seasons.  Karen has the distinction of being the Division I coach with the most wins.