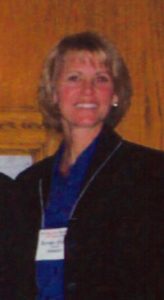 Karissa is currently the principal of Lewis s. Mills High School in Burlington, CT.  She is on the Board of Controls of the Connecticut Interscholastic Athletic Conference, the Chairperson of the Sportsmanship Committee, and on the Education Committee of the United States Olympic Committee.

As Athletic Director for the 7-12 programs at Litchfield High School, Karissa started the Athletic Leadership council for students.  She has also served as president of the Connecticut Association for Health, Physical Education, Recreation, and Dance (1999-2000).  Karissa was a founding member of the Connecticut Association for Advancing Young Women in Sports Committee.  This committee has as its goal the planning and implementation of local and statewide activities involving young girls and women in sport-related careers.

Karissa has been extensively involved in local, regional, national, and international sport.  Her extensive involvement includes: the United States Olympic Committee (1999-present, nationally and internationally), the Department of Astrophysics, Harvard University (1999-2000), and the National Association for Girls and Women in Sports (1996-2000).  She served as coach for the girls’ basketball team at the World Scholar Athlete Games (1977) and the head coach for the 5-9 girls field hockey team at the Nutmeg Field Hockey Camp (1995-1997).

Many organizations have recognized the achievements of Karissa, including: the Marblehead Boosters Hall of Fame (1999); Seventeen Magazine which featured her team in Fall, 1997, for outstanding talent, sportsmanship and unique team spirit; and Litchfield High School presenter her with the Michaels Cup for her Outstanding High School Athletic Program (1997-1998).

“Perhaps the greatest compliment I have received is in knowing that former student-athletes have become teachers and coaches.  They are now experiencing the thrill of influencing young women to become fit, healthy, and string – in body, mind and spirit.”

“I have moved from the teaching and coaching realms into the world of building leadership, but I am committed to enhancing sport opportunities for young women in any way that I can.  I am also committed to developing sport opportunities for young women in particular.  I have spoken to many girls’ sport organizations in Connecticut and in other states about the benefits of involvement in athletics, and I organize activities to support National Girls and Women in Sport Day.  Sport is in my soul…and I will do whatever I can to promote involvement of girls and women everywhere in sport activities.”