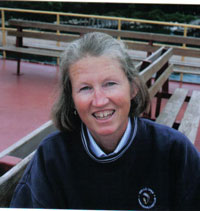 Katharine “Kitty” Palmer is a tennis professional at the Madison Racquet & Swim Club in Madison, CT.  At the Racquet Club Kitty is mainly in charge of the juniors, the team matches, and the ladies’ teams.   She is the head tennis coach at Hand H. S., in Madison and has been the head field hockey coach at Guilford H.S. for the last 28 years.