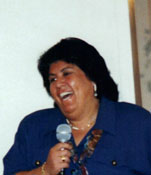 Kathleen is in her first year as an athletic trainer at Bridgewater State College.  For many years she was head of the athletic training program at Rhode Island College.

Her involvement in WomanSport has a long history.  She was a track coach at Providence College from 1977-1981.  She also initiated the first varsity cross country and indoor-outdoor track and field programs at Providence College.  She broke ground by being the first female athletic trainer at Providence College and Rhode Island College, and was the first female elected to the Rhode Island Interscholastic Injury Fund Executive Board.  She has worked with the Rhode Island National Girls and Women in Sport Day.  Kathy has also served as the Rhode Island Public Relations Chairwoman for the NATA Women in Athletic Training Committee.  She is a member of the New Agenda: Northeast and was a presenter at the 1988 Conference at Smith College.
Additionally, Kathy has served as the secretary/treasurer for the Eastern Athletic Trainers Association and is the founder and chairwoman of the Medical Advisory Board to the Rhode Island Interscholastic League.  She was an athletic trainer at the 1994 Extreme Games, National Figure Skating Championships, and at the 1996 Olympic Games in Atlanta.

Kathy has received many awards and recognitions: 1972 she was MVP in cross country, basketball, and track & field; 1974 she was the New England Indoor & Outdoor Track and Field Champion; 1978 the Rhode Island Super Sports Champion; 1980 she ranked nationally in racquetball; 1988 Who’s Who of Women in Society and in the World of Who’s Who of Women; 1990 listed in Two Thousand Notable Women; and in 1993 she was inducted into the North Providence, Rhode Island, Athletic Hall of Fame