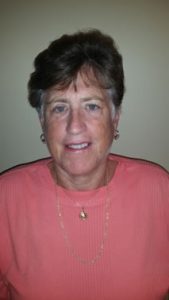 Kathleen retired from teaching, coaching and officiating in June of 2011, after 36 years of being involved with girls’ and women’s sports.  She is a 1975 graduate of Plymouth State College with a degree in physical education.  She earned a Masters in Education from Bridgewater State College in 1980.

Kathleen began coaching and teaching at Norfolk County Agricultural High School in 1981.  She coached volleyball there for 30 years.  In 1988 she developed and organized the Rams Volleyball Developmental Camp.  She was a basketball official (IAABO Board) for 15 years (1980-1995)  She officiated women’s lacrosse, high school and collegiate girls, from 1985-2000 and was vice president of development for Eastern Mass. Women’s Lacrosse Association from 1990-1997.  From 2005-2008 Kathleen served on the board of MAHPERD.

In 2011, Kathleen retired as a teacher, coach and athletic director from Norfolk County Agricultural High School.  Currently (since 2012) she is the executive secretary of the Mayflower Athletic Conference.

“As most of us know the expression to ‘pay it forward’ is defined as a person becoming the beneficiary of a good deed who then repays it to others rather than the original benefactor. My opportunities in athletics came from the struggles of those before me. I have been blessed to have been involved with athletics for 44 years as a player, coach, official and administrator. My ambition was always to Pay It Forward!”