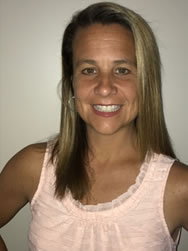 After playing multiple sports at Seekonk High School and women’s basketball at Holy Cross, Kim has been a clinician for girls elementary and high school basketball camps since 1988.  She has worked at the All Star Players Basketball Camp (1988-1992), and camps at UConn, Stonehill College, Holy Cross and Wheaton College (1992-1996).

She has been a motivational speaker for female student athletes at Seekonk High School and for elementary school students.   Kim describes the joys and excitement of playing high school basketball at the Boston Garden and competing for a state championship in her speeches.

She left her career in pharmaceutical sales (2005) when her daughters were born to take on a career as mother, official, and coach.

“I am able to pass down to these female athletes the importance of effort, respect, loyalty, and strength that comes with playing sports.  As an official, I am able to teach the rules and the meaning of sportsmanship to the participants.  As a coach, I teach strategy and respect for the game and for each other.”