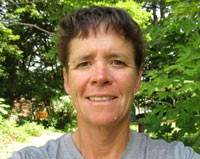 After graduation from Tufts University, Kris became the head softball coach at Tufts in 1988.  In 1990 she also became Tufts’ head volleyball coach.  These positions continued until 2003 when she left Tufts to become the head softball coach at Williams College and the Senior Women’s Athletic Administrator.
Kris has been a member of the New England Intercollegiate Softball Association (1988-2012) and the National Fastpitch Coaches Association where she has served on the board and executive committee since 2000.

“My professional organization experience with the National Fastpitch Coaches Association has been a big part of my career on the national level … working on national issues and the NFCA conventions.”

Kris is proud to connect many teams in New England with a non-profit organization she helped to found called Team Impact.  This organization unites children who have “life threatening diseases or debilitating health challenges” with college athletic teams.