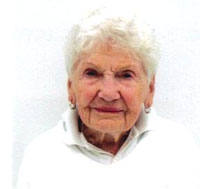 Lilyan Wright has certainly had a full career. She taught and coached at 4 high schools for 19 years and at Trenton (NJ) State College for 30 years. She introduced varsity sports at 2 high schools and introduced the women’s varsity athletic program at Trenton State (now the College of New Jersey) in 1961. She coached varsity field hockey, lacrosse, basketball, tennis and track & field while holding a national rating for officials in basketball, field hockey, lacrosse , volleyball, and softball. Presently Lilyan holds a national honorary umpiring rating from US Field Hockey and a national emeritus rating from US Women’s lacrosse.

Although most of her years of service were in New Jersey, Lilyan has brought her expertise to New Hampshire where she has served, since 1991, on the NH Board of Women’s Field Hockey Association and the NH Board of Women’s lacrosse officials. Lilyan received the Pathfinder Award from AAHPERD in 1991, and the 1993 Distinguished Leadership Award given by NJAHPERD. She is a member of the Temple University Hall of Fame and the Trenton State College Hall of Fame.