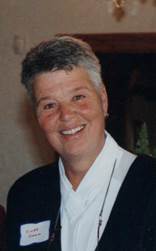 Her coaching records include: basketball 60-17 (NCAA Champions 1975-1976); softball 44-38; volleyball 142-53 (Berkshire League champions 1986, 1988).  At the collegiate level, her University of New Haven basketball team was runner-up in their conference and her volleyball teams with a 33-11 record was third in the Ivy League.

“Sports have always been the best thing in my life.  I feel I have truly been blessed to have the opportunity to view sports as a coach, player, official, presenter/lecturer, and as a spectator.  I am not sure how many people get to do a job they honestly enjoy doing every day of their lives.  I have been teaching health and physical education for 32 years and I wouldn’t change it for anything in the world as I have had the opportunity during my teaching and coaching to work with the best and most precious commodity in the world – youth.

My greatest hope throughout my years of coaching and teaching was that I could make a difference in one person’s life through sports because then I know I would be more that successful in my job.”