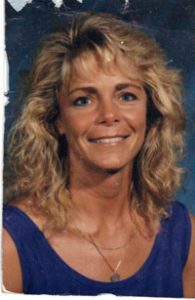 “My career began in 1973 at a small high school in Connecticut where I coached co-ed gymnastics and softball.  During my career I have coached gymnastics, softball, field hockey, and lacrosse.  From 1973-1976, I directed and coached gymnastics at various park and recreation and YMCA programs as well as at Middletown, CT, High School, a multicultural school.”  From Middletown, Lorene moved to Farmington, CT, High School where she has been the head coach for gymnastics and field hockey and assistant coach for girls’ track, softball and boys’ track.

In 1978 she was approached by the parents of her field hockey players and asked if she would be interested in starting a girls’ lacrosse program.  She had never played or coached the sport.  After much research and attendance at clinics, she began two years ago with 76 girls in the first year.  Her second year grew to 85 and she fielded three teams.  This year the lacrosse team will be recognized as a varsity sport.  “I am still learning the game, but enjoying the challenge.”

Lorene has also coached in the USFHA Futures Program as an elite level coach and in 1991, she was a coach in the Junior Olympic Games for field hockey.  IN 1988 and in 1991, she was the Connecticut State Gymnastics Coach at the National High School gymnastics Championships at the Olympic Training Center in Colorado Springs, Colorado.

Lorene organized and chaperoned a field hockey tour to Europe for 30 players and some parents in 1988 and in 1995.  They were fortunate to have some homestays with the European players in England, France, Belgium, Germany, and Holland.

“Each year as school begins, I can’t wait to get on the field to start coaching field hockey.  As I watch the players work hard and achieve those basic skills, I still get goose bumps on the legs as I am excited at their dedication and hard work.”