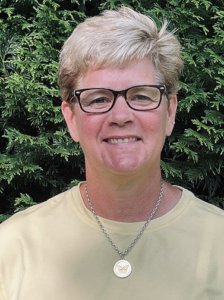 Lori Letendre’s passion for sport was born in western Massachusetts through a mix of informal backyard games with family and neighborhood friends, and traditional organized youth sport participation opportunities. Lori began stepping into and embracing her role as a leader in women’s sport as a three-sport athlete at Amherst Regional High School and a two-sport athlete at Clark University.

At Clark, she earned a degree in business management while competing as a four-year starter at catcher for the softball team and in goal for the field hockey team. In both sports, Lori earned team, university, league, regional, and national honors. More than 30 years after graduating from Clark, Lori’s name still can be found listed in NCAA Division III Field Hockey record books in game, season, and career categories.

After completing hall-of-fame careers as a student-athlete in both high school and college, Lori Letendre made what she views as a “natural transition” into coaching and leadership roles in youth and high school sport. Lori cites a strong desire to share her passion for and knowledge of the sport of softball with others as the driving force behind this transition into coaching. As a result, countless youth and high school athletes in the town of Mansfield and beyond have been afforded the opportunity to grow under her leadership.

Lori has served on the Mansfield High School (MHS) softball coaching staff for the last 9 years, with 8 of those years in the role of varsity head coach. Since becoming the head coach, her teams have qualified for the MIAA state tournament in all but one year and reached the MIAA State Division II Quarterfinals in 2021 and the Round of 16 in 2022.

In addition to serving the sport of softball as a high school coach, Lori dedicated several years to the Mass Drifters Softball Club in both coaching and board leadership roles. Earlier in her career, she held similar positions with Mansfield Youth Softball, Mansfield Girls Softball Association, and Mansfield Youth Basketball.

Although her coaching record reveals her ability to lead teams to winning seasons, league and tournament championships, Lori states that her primary objective is to “create a sport environment in which positive life skills, such as confidence, competitiveness, teamwork, leadership, and enthusiasm can be fostered and developed” in the young athletes she coaches. The impact of her life-skills development approach may be most evident in the Mansfield High School/Mansfield Girls Softball Association Collaborative youth programs she created to allow Mansfield High School student-athletes to serve as mentors and coaches of the younger softball participants in their community.

Throughout her life, Lori has recognized the impact sport can have on the lives of those who choose to participate. As a result, she has dedicated herself to creating quality sport opportunities for others to flourish as athletes, and to develop as future leaders in all areas of their lives.