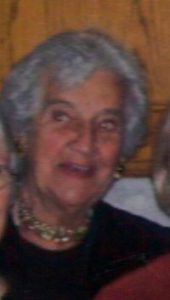 Lucy – or Mrs. B. as she is known at Deering High School – coached varsity field hockey for 28 years, basketball for 11 years, and softball for 11 years.  Her field hockey coaching included three tenures: 1949-1958, 1959-1961, and 1971-1988.  During her years as a physical education teacher and coach, Lucy was regarded as Deering’s “Dean of Women” who supported and motivated her players on and off the field.

In 1985, Lucy was the special guest of the Maine Field Hockey All State Banquet where she was honored for winning over 100 games.  In 1989 she received the Special Recognition Award from Sargeant College (B. U. Alumni Association).  Lucy was the 2004 recipient of the Exemplary Lifetime Commitment Award presented by the National Girls and Women in Sport Association.  She was inducted into the Maine Field Hockey Hall of Fame in 2004.

Lucy’s accomplishments at Deering came at a time when she was also a dedicated wife, homemaker, and mother of three sons.  Though retired from teaching and coaching, she is still one of Deering’s biggest fans who cheers from the sideline during most games.