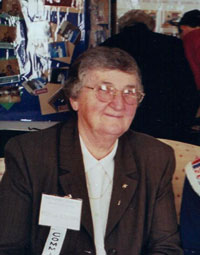 Marcia’s involvement in sports has not only been as a coach and official, but also as an advocate for the inclusion of girls’ tournament play with the Massachusetts Interscholastic Athletic Association.

She served on the Board of Control of the MIAA and the DGWS Committee of MAHPERD, drawing up the first rules to govern girls’ sports.  She also persevered until the rules were included in their “Blue Book.”

Her committee drew up the original proposal and rules for the Girls’ Sectional and State Basketball Tournaments.  She was also involved with the Track & Field Committee and assisted in directing the sectional meets in their beginning years.

Marcia, currently the Director of Physical Education in the Abington Public Schools, has also served as an elected official in MAHPERD.  She has been the recipient of the Catherine E. Comeau Award for professional contributions and excellence from the Bridgewater State College Alumni Association.

Marcia grew up on the family dairy farm and was very involved in all the chores associated with farming.

Her rigorous early training carried through in her 39 years of service in the Abington Public Schools.

Marcia’s involvement with Massachusetts sport tournaments: directed the South Invitational Basketball Tourney for 10 years, started the first State Girls’ Basketball Tournament (with Barbara Hood).  For the first time, the North was allowed to play the South.

Her many honors reflect a career of service and responsible action on behalf of girls and women in sports:
1989 – Dr Catherine E. Comeau Award for outstanding leadership and professional achievement.
1990 –  Bridgewater State College and the Hyannis-Bridgewater Physical Education Alumni Association Award for her contributions to women’s athletics.
1997 –  Bridgewater State College Alumni Award for outstanding service on behalf of the Alumni Association.
2006 –  Heights Award recipient from the MA State Lottery and Boston College for significant contributions to the development and advancement of women’s sports in Massachusetts
2007 –  Annual State Achievement Award from Alpha Upsilon (a member of the Delta Kappa Gamma Society International).

Presently, Marcia is an active member and officer for many organizations and committees:  treasurer of Alpha Kappa Chapter of Delta Kappa Gamma, member of the Bridgewater State College Physical Education
Alumni Board, committee chair of the New Agenda: Northeast, and a member of Sigma Theta Phi.

Marcia also serves as vice chair of the Bellingham Historic Commission and president of the Briggs Family Reunion.  She has never lost her love of sports and still participates in the Senior Olympics and the USATF
Masters in field events.

Marcia has given a great deal of time and effort to each committee on which she has served.  She enjoys participating in the work of these committees and in the senior games.  She especially enjoys the many friendships developed along the way. Marcia’s sister Diana firmly states that

“Her family is proud of Marcia and her many achievements.”

Purely and simply, Marcia has devoted her professional life to teaching, sport and people.

Marcia A. Crooks died peacefully at Cape Cod Hospital on July 3, 2020. Marcia was a direct descendant of the Crooks family that settled in Bellingham in the 1700s and lived on that property her entire life.

Born October 4, 1933, Marcia was the daughter of the late Elmer and Catherine (Woodward) Crooks. She is survived by her sister Shirley and husband Thomas Hutson and her sister Janet Hendrickson and many nieces and nephews. She was preceded in death by her brother Howard Crooks and wife Jacqueline, her sister Diana Crooks and brother-in-law Robert Hendrickson.

Marcia was a 1951 graduate of Bellingham High School and received Bachelors and Masters degrees in Physical Education from Bridgewater State College. She taught and served as Director of Physical Education and Coordinator of Health Education (K-12) in the Abington schools for 37 years. Marcia was also Abington’s Head Coach for women’s basketball, field hockey (never a losing season), softball and track and field, the latter, which she established. During the 1960s-early 1990s, she was an officer of multiple regional and state girls’ and women’s sports organizations and was a founder of the Girls’ State Basketball Tournament.

Marcia held multiple MA Interscholastic Athletic Association positions and persevered in getting the organization to recognize girls’ sports and to sponsor Girls’ State and Sectional Basketball Tournaments. Since 1956, she served in various official capacities for the Bridgewater Alumni Association (PE) and was an inductee to both the Bridgewater State University Athletics Hall of Fame and the New Agenda Northeast Hall of Fame. Whatever activity Marcia participated in, she always gave it her all and her legacy lives on in MA women’s sports.

After retiring, Marcia traveled throughout the US to compete in the Senior Olympic Games. She was a medalist at every meet, but two, in five field events and participated in the National Senior Games. Marcia’s dedication to preserving the history of her hometown was evident in her many years of service as Chairperson of the Bellingham Historical Commission, from which she just recently retired.

Funeral arrangements are private, but her service may be viewed live on Wednesday, July 8, 2020 at 11 AM at https://client.tribucast.com/tcid/21528178 Arrangements are under the direction of the Holt Funeral Home, 510 South Main St., Woonsocket. In lieu of flowers, donations may be made, in Marcia’s name, to New Agenda Northeast (a non-profit women’s sports organization dedicated to advancing the role of girls and women in sports): c/o Leda Levine, 106 Armiston Street, Brockton, MA 02302. To leave an online condolence visit www.holtfuneralhome.com