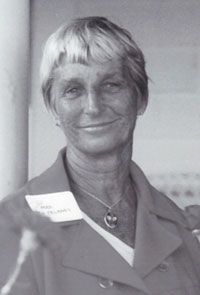 To the people in the City of Newton who cared about sports and young people, Margaret “Peg” Delaney was a legend.

She retired to Florida and continued to advocate for WomanSport.  When she was refused tee-off time at a golf club because she was a woman, she fought for and won the right for tee time.  She was also a tennis instructor at the Melbourne Tennis Club.

Peg, who has an interest in all children, was a member of the Board of Directors for the Wrentham State School for the Mentally Retarded.

For many years, Peg Delaney was the summer manager of Crystal Lake in Newton which served as the recreation center for Newton residents.  She was very active in building the swimming program there.  In August, the City of Newton Placed a bench in front of the bath house in her memory.  The plaque is inscribed with the words “in loving memory to our legend.”

Her daughter, Kathy Delaney-Smith, said that “her whole life was dedicated to young people.”
(Information from Kathy Delaney Smith and S. I. Rosenbaum, Newton Tab.)