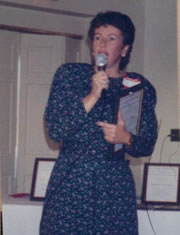 Margaret became involved in women’s sports in 1968.  It was then that she entered Smithfield (RI) High School and, for the first time in her life, was provided the opportunity to play on a sports team.  She played 3 seasons for each of her four years at Smithfield High School.  After high school she played field hockey, basketball, and lacrosse for the University of Rhode Island where she majored in health, physical education and recreation.

Quoting from Margaret: “My experiences as an athlete were most rewarding and profound.  Through sports, I was able to discover my talents and develop a very positive sense of myself.  I enjoyed all of the good that sport has to offer – the friendships, excitement, competition, championships, etc.  I knew then that I had been given a special opportunity and, what is more important, I knew that I wanted to work to provide others with the same opportunities.”

She is currently in her 19th year of teaching and her 16th year as athletic director.  Prior to coming to Mansfield (MA) High School in 1989, Margaret was the athletic director at Cardinal Cushing High School for 3 years and at Notre Dame Academy for 9 years.  Her career has included all aspects of athletics – teacher, coach, athlete, official, and administrator.  Margaret has always been acutely aware of the need to include women in athletics and, in her position as an athletic administrator, she has ensured that women are involved.  She included and invited women as guest speakers; she developed and organized the first women athletic director’s luncheon at the Massachusetts Secondary School Athletic Directors Association (MSSADC); worked to include all-female Catholic high schools in the Singelais Award; and, in her current position at Mansfield High School, she has brought equity to women athletes and provided female coaches for the female high school athletes.  All but one of the girls’ varsity teams are coached by females.

Her expertise in coaching was recognized by the Boston Globe (cross country Coach of the Year) and the New Agenda- Northeast for contributions to girls’ and women in sport.  She was named District H Athletic Director of the Year in 1983.  Margaret has also shared her expertise and knowledge with her colleagues, speaking at the MSSADA Fall Conference: “The Need and Value of Women Coaching Women;” the MSSADA Winter Conference: “The Elements of a Successful Program;” and at an MIAA Coaching Workshop: “The Role of the Coach.”