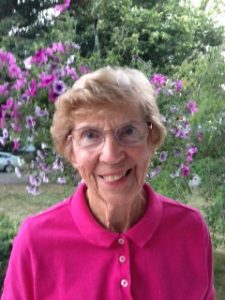 Peg graduated from Sargent College at Boston University.  While a sophomore in 1953, she began officiating.  After 63 years of blowing the whistle, she has finally retired in 2016.  She needs more time “for tennis and pickleball.”

Through teaching, coaching and officiating experiences in Illinois, New York, and Massachusetts, Peg has outlasted and out run most of her peers.  In fact, at the age of 72 in 2006, her daughter convinced her to run the Disney Half-Marathon in Orlando, which she finished in 3 hours, 10 minutes, which was 2nd for her age group.

As a sophomore at Lexington, MA, High School, she played varsity field hockey.  She was a league All-Star for 2 years.  She was on the Midwest FH first team from 1956-1960, traveling to the National Tournaments in Holyoke, MA, St. Louis, Chicago, and Washington, DC.  She kept her field hockey rating and became a sectional official in Illinois.

The Boston Globe highlighted her officiating career in 2014.  She was still officiating one game a day at that time.  She also talks to field hockey parent groups in Lexington about the rules and the game of field hockey. 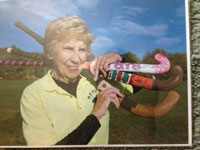