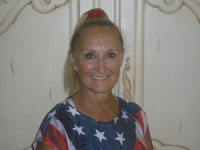 Marianne “Teddy” Davis graduated from Southern Connecticut State University and began teaching and coaching in 1970.  That first year, she coached three sports – field hockey, gymnastics, and track – for $200 total.  Her stories of establishing a gymnastics team with “no budget” exemplifies the status of girls’ sports before Title IX.  Teddy survived and her teams thrived because of her creativity and perseverance.

Because there were no gymnastic officials, Teddy became one of the first six in the state.  During her 40 years of judging gymnastics she earned the rank of Elite National Judge (1 of 200) and judged several NCAA regional and national championships.  She also judged the World Special Olympics.

Currently the Health and Physical Education Dept. Head for East Greenwich Schools, Teddy has spent 35 years as a member of the RI Interscholastic League, the RI Association of Women’s Gymnastic Judges (4 years as President), and the US Gymnastic Federation.  She has coached high school, college, and club teams, and has judged high school and college level competitions.

In 1988, Teddy received the USGF Regional Appreciation Award.  She was selected to judge both Division III and I NCAA Collegiate Nationals.  In 2007 she was the RI Gymnastics Judge of the Year and in 2009 the RI Physical Education Teacher of the Year.

For over 40 years, Teddy’s true love has been “training judges and gymnasts in applying gymnastics rules and techniques.”