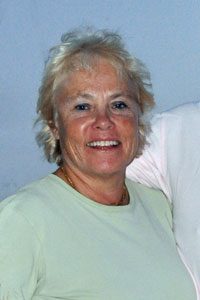 After graduating from Springfield College in 1974, Beth Ahearn found herself caught up in the Proposition 2 ½ merry-go-round, moving from one school system to another. In each system she taught, coached and officiated.

After teaching for 10 years and getting a pink slip every year, Beth was offered a position in an American school, Colegio Internacional de Carabobo, in Valencia, Venezuela. The school was PK-12 and the enrollment was 250. Her teaching assignments included teaching PE, Health and Grade 7 Math. She was also responsible for the girl’s intramural sports program which included soccer, basketball, volleyball and softball. While in Venezuela, 1984-1986, she was able to explore some of the country and neighboring islands.

Upon her return from Valencia, Venezuela (where she coached volleyball, basketball, softball, and soccer), Beth secured a position in Plymouth and earned seniority. When Plymouth split into North and South high schools, Beth became the first field hockey coach at Plymouth South. She remained there until 2006.

Along with coaching, Beth was also active in MSSFHA (MA South Sectional Field Hockey Association). This gave her opportunities to attend coaching clinics and to work on the Scholarship Committee to award money to girls to attend camps and clinics.

Beth has been honored by the MIAA / New Agenda as an Unsung Hero and as the (Old Colony League) Coach of the Year in the Old Colony Memorial Newspaper of Plymouth.