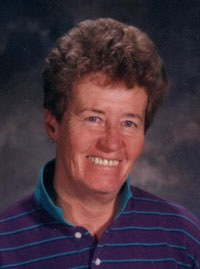 Marie, a teacher at Fairfield High School, Fairfield, CT, was selected in 1983 for the CT Pathfinder Award.  The award, sponsored by the National Association for Girls and Women in Sport, is presented annually to one woman from each state who advocates, recruits, and enhances opportunities for girls and women in sport and sport leadership.

Her peers speak in glowing terms of the efforts of Marie over the years to provide opportunities for young women to participate in sports at local and state levels.  Over the years she introduced into her programs lacrosse, track & field, badminton, team handball, weight training, and golf.  She challenged the Fairfax Board of Education for women’s equity in sport which resulted in more money being allocated for their teams and for coaching salaries.

During her coaching career, her teams have qualified for state tournament play 8 times between 1973 and  1987.  She had an undefeated season in 1965.  In 1984 she received the Connecticut High School Coach of the Year Award and received the “200 Victory Club Award” in 1987 from the Women’s Basketball Coaches Association.

She was inducted into the Connecticut Women’s Basketball Hall of Fame in 1991.