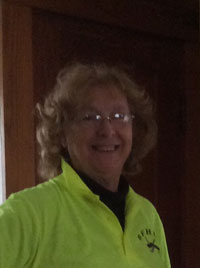 As a young girl, Nonie and her friends hung a peach basket on a tree in Roxbury, MA, to play basketball.  At Gordon College there were only 2 sports so she started a field hockey team – “lining the field with a can of lime and a string tied to my foot to make the circle.”

As a pre-Title IX graduate of Wilmington HS, Nonie lettered in three sports – field hockey, basketball, and softball.  She was an All-Star and MVP and received a sports scholarship in 1961 from the Wilmington Boosters.  At Gordon College, she was basketball’s Most Improved Player in 1963 and Most Valuable Player in 1965, and captain in 1964-65.  From 1969 to 1973 she played semi-pro women’s basketball with the “Salem Royals”.  In 1997 Nonie was inducted into the Wilmington HS Hall of Fame.

For 20 years (1969-1989) Nonie officiated women’s basketball for the North Shore Board.  Nonie has been associated with officiating field hockey in Massachusetts for 47 years.   She was the field hockey assignor for the Cape Ann League, Northeast Conference, and Private Schools from 1986-2012.  She has worked training new officials since 1980.

“The game lasts 60 minutes, but the lessons learned last a lifetime.”  “It is the striving that takes place in each contest that creates growth and maturity.  We all strive to do our best.”