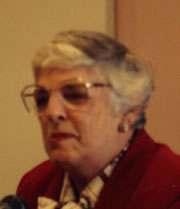 Martha, a 1951 graduate of Bridgewater State College, started her teaching and coaching career at Abington High School where she taught physical education and coached field hockey, basketball, and softball from 1959-1956.  From Abington, Martha moved to Boston State College where she taught in the major department of Health and Physical Education.  At the time of her retirement, Boston State College had merged with the University of Massachusetts, Harbor Campus.

Martha was an active member of the Southeastern and Boston Boards of Officials, where she held elective office and judged at ratings.  She was a delegate from Massachusetts to the first National Institute for Girls’ and Women’s Sports at Oklahoma University in November, 1963.
In 1966, Martha served as the President of the Massachusetts Association for Health, Physical Education and Recreation.  She also served as a clinician with the Lifetime Sports Foundation and organized several coaching clinics during the several years that the Foundation functioned.  As an active member of the Division of Girls and Women in Sport State Committee, she worked to establish the first State Girls’ Track meet and organized clinics to assist coaches in track & field and gymnastics.

Martha was an honorary basketball official and received honor awards from MAHPERD in 1968, EDA and AAHPERD in 1977, and was the recipient of the first Joseph P. McKenney Award in 1977.