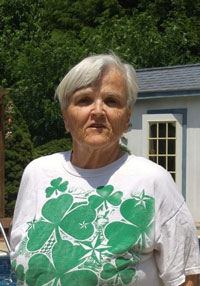 Mary Watson graduated from Bridgewater State College in 1967 with a bachelor’s degree in Health and Physical Education.  However, when asked where she got her training to be an athlete and coach, Mary replied, “from my 6 brothers.”
Mary began teaching and coaching in Rockland after graduation and in 1973 (following the passage of Title IX) was the first woman to take the town and state to court for equal pay for coaching.  The case was settled in the spring of 1975 and she was paid retroactively to 1973.

From 1972-1982 Mary was the girls varsity basketball coach at Rockland High School, during which time her teams were Old Colony League champs 8 times and South Finalists twice.  Mary then became the assistant coach for Stonehill College women’s basketball from 1982-1989.  She returned to Rockland High School in 1996 to be the Associate Varsity Coach until 2001. Her teams were 5 times the Patriot League Champs and also the State Champs in 2000.

Some of the many honors given to Mary Watson include: Northeast-10 Assistant Coach of the Year (1987), and induction into the Halls of Fame at Rockland High School, Cardinal Spellman High School (as an athlete), Stonehill College, and the Massachusetts State Basketball Association. In 1987 (when girls could play Little League) Mary was named the Massachusetts Amateur Baseball Woman of the Year.

For the last 14 years, Mary has been coaching boys’ junior high basketball because of her grandchildren.  Her team often scrimmages the girls’ varsity team which benefits both programs: “the boys get to see girls in a whole different perspective, as athletes; the girls become more competitive during these scrimmages”, beating their younger brothers and friends.

Currently, Mary runs a summer basketball clinic at St. Joseph’s School in Holbrook, to raise money for the Cystic Fibrosis Foundation, helping her granddaughter and others with this life-threatening disease.