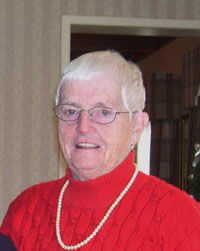 In 1973 Mary McDonough (commonly known as Liz) worked with a group of parents concerning the issues of Title IX and Chapter 622 as they related to girls’ athletics at Arlington.  In 1974, Liz assumed the position of Coordinator of Girls’ Athletics in the Arlington Public Schools.  In 1975 Liz became Director of Athletics for Girls, and in 1985 she assumed the position of Director of Athletics for both the girls’ and boys’ programs.

Prior to her employment at Arlington High School, she coached CYO and at Notre Dame Academy.  Before taking on her administrative position at Arlington, she coached field hockey, basketball and softball.

She was an active basketball official for 20 years and field hockey for 4 years.  She has also served on the Rating and Examinations Committee for the Boston Board of Officials.  For 12 years, she served on various committees of the MIAA, chairing the State Field Hockey Committee, the State Softball Committee, and the Eligibility Review Board.