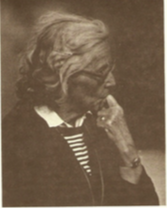 Mim retired from her teaching position in Concord in 1975, the same community in which she began her teaching career in 1935, following her graduation from Sargent College.  From 1935 through 1960, she coached all of the girls’ sports.  When she assumed an administrative position – Director of Girls’ Sports – she continued to teach and coach.  She continued to function as a teacher, coach, and director of girls’ athletics until Concord High School consolidated into Concord-Carlisle Regional High School.

She was able to establish the first Middlesex Girls’ League in 1948 which was later known as the Dual County League.

Mim was also active as a field hockey official, starting in 1931 as a college junior.
Although her teams participated in organized high school competition, tournaments, and play days, during those years, wins and losses records were not kept.