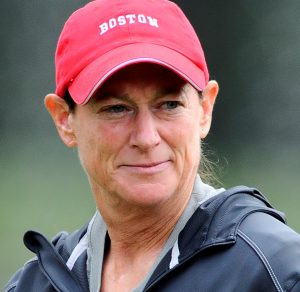 Nancy received her bachelor’s degree in public health from UMass in1983 and her master’s in exercise and sport studies from Smith College in 1988.   Her introduction to coaching was in 1983, as the girls’ volleyball coach at Temple Aliyah.  She then coached girls’ varsity soccer at Danvers High School.   While in graduate school Nancy moved  to collegiate coaching.  As a graduate assistant Nancy coached softball at Mount Holyoke College; women’s soccer and jv basketball at Smith College and women’s soccer at UMass Amherst.  Nancy’s  first head-coaching position was at Lake Forest College in Illinois. She directed the program for two years and won the MACW Championship during the 1989 season.  From 1990-1994 Nancy was the head coach at Plymouth State for both basketball and soccer. Her teams twice won the New England Regional Championship.  Nancy was named the New England Coach of the Year in 1991 and 1993, and received the NEWISA/Brine Service Award in 1993. Nancy recently completed her 24th season at the helm of the Boston University women’s soccer team.  She has led her BU squad  to 14 NCAA tournament appearances, 9 America East Championships and 4 Patriot League titles. She was named America East Coach of the Year on 9 occasions. In 2018 Nancy reached 400 wins as a collegiate women’s head coach!

“Fortunately, I came along at a time that I could choose to make a profession of college coaching.  Hopefully I have influenced and helped the development of many young women to find their best selves through meeting challenges and ultimately realizing success!”

Nancy’s tenure at Boston University goes beyond coaching.  She works on several important national committees.   From 1989-1995 she has served as the National Chairperson of the NSCAA All-America Committee as well as the Division III NCAA Regional Selection Committee from 1992-95.  She is currently on the NCAA Division I Women’s Soccer Committee and on  the staff for the NSCAA National Coaching Academy.