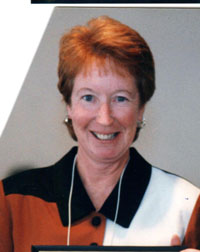 Patricia is  a graduate of Springfield College in Springfield, MA.  She is currently a teacher of physical education and health and a coach at West Bridgewater, MA, High School.

Her league affiliations include the Mayflower League in basketball, tennis, softball, track, and field hockey.

Her field hockey team records were 150-45-20.  Records for her other teams are not available.  Titles in field hockey and basketball were won by her teams: in 1990, they won the EAC championship and in 1993, the South Sectionals – they also made the State finals.