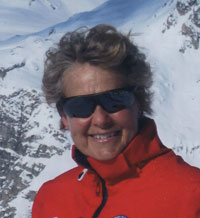 Penny Pitou began her ski racing career not long after she put on her first pair of skis at the age of four.  By the time she was eight, she was competing against boys – and beating them.  While still in high school, she astonished the skiing world by winning the Downhill, Slalom, and Combined at the Junior National Championships at Whitefish, Montana.  At the age of 17, Penny was picked as one of seven women to represent the United States in the 1956 Winter Olympics in Cortina d’Ampezzo, Italy.  What very few people knew was that she had made the Olympic Team using skis that were factory seconds!

In 1958, Penny competed in the FIS World Ski Championships in Badgastein, Austria.  In 1960, the Winter Olympics came to Squaw Valley, California.  Penny captured a silver medal in the Downhill, and another silver medal in the Giant Slalom.  She is the first American, man or woman, to have won a medal in the downhill event in the Olympics.

Her racing career was climaxed in 1961 with her election into the National Ski Hall of Fame as “the best Alpine Skier of the Year.”

Penny established two ski schools – one at Gunstock, New Hampshire, and one at Blue Hills, in Milton, Massachusetts.  She was co-director of the schools from 1961-1968, and became a Certified Professional Ski Instructor in 1965.

During 1972 and 1973, Penny coached the Laconia High School Girls’ Ski Team to two successful seasons.  In 1974 Penny purchased the Lakes Travel Agency in Laconia, NH.  In connection with her business, she coordinates and personally escorts ski trips to Europe each winter and also leads hiking trips to the Alps in the summer.  She has trekked in Nepal and Northern India, tracked gorillas in Zaire, and climbed Mt. Kilimanjaro and Mont Blanc.

As part of her community involvement, Penny chairs seminars on drug and alcohol abuse and speaks before various organizations on women and travel.