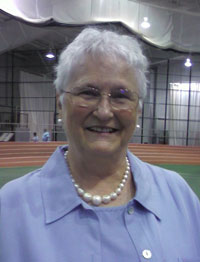 Priscilla Davis has been involved with swimming for 37 years.  Starting out as a “gofer”, she progressed to become one of the most outstanding officials in the sport.  Recognized for her contributions to swimming, Priscilla has been awarded the Jack McDonald Coaches Award for high school coaches, the Maxwell Excellence Award from USAS, and the Safety Commendation Award from USAS.  She has been honored by the Bay State Games for 25 years of service and given a lifetime USAS membership by New England Swimming.

Most recently (June, 2010) Priscilla was recognized by Special Olympics (MA) at their Summer Games Opening Ceremonies for 35 years of service.

Priscilla has served on the MIAA as the officials representative to the Swim Committee for 11 years, the Safety Education Committee, the Disability Committee of the USAS, and as a member of the Board of Directors of New England Swimming for over 25 years.

Having officiated both men and women swimming events, Priscilla is proud to have been recognized for treating both groups “equally and fairly.”  She is a model for officials in all sports.