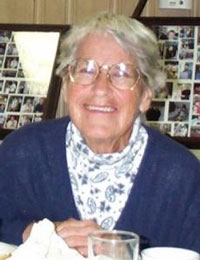 Priscilla is a 1943 graduate of Tufts Bouve Boston School.  Following her graduation, she taught at Amherst, MA, in the high school and in the elementary school from 1943-1947.  At Amherst, she taught basketball, softball, tennis, and, during the summer, swimming.  She also organized an outing club, mountain climbing, biking, swimming and basketball extramural program.  She and other physical education teachers organized competitions for the teams and drove their players to the competitions.  Often, the personally financed equipment and supplies.  The coaches also officiated the games between their teams.  She organized a community badminton program in Canton which she directed for three years.  Her teams qualified for state competitions.

Priscila is an American Red Cross Instructor Trainer in swimming and holds a handicapped swimming certificate.  She has been a member of the WGAM Gold Handicap Committee for 20 years and holds a USBA badminton rating.  In the past, she has held ratings in basketball, field hockey, and swimming.

Competitions were nonexistent during her years at Amherst High School.  In order to provide competition for her players, she took them to UMass where they played with the college players.  They tied UMass 1-1 and lost to Mt. Holyoke 2-1.

When she was in the eighth grade in Brookline, MA, she was awarded the award for the “Most Athletic Girl.”  In 1939, she was awarded the Schick Cup for excellence in Scholarship and Athletics.  In 1999 she was inducted into the Senior Badminton Hall of Fame.  In 2000, Priscilla was cited by the Wampatuck Country Club Ladies Division IV Golf Citation for contributions to the golf program where she has run tournaments, clinics, and rules interpretations.

“My life in the field of sports is unusual.  I married in 1947 and have 8 children.  But I never stopped using my sports knowledge throughout all the years – continuous from Bouve-Boston, teaching in Amherst, and then in Canton…and at the Massachusetts Hospital School for Crippled Children.  Throughout all this, my children came with me. Five of them became instructors under the Red Cross.  Six of my children still play badminton and their children do also.  All the athletic life style has been rewarding as I am still going strong at age 81.”