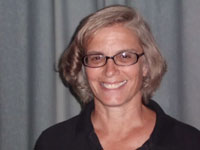 Since 1994, Randy Mattson has been involved in New Hampshire volleyball both at Inter-Lakes High School in Meredith and through the Lakes Region Juniors Volleyball Club. Her girl’s volleyball program at Inter-Lakes HS continues to offer thriving programs for various levels of ability. They field 3 high school programs and 2 middle school teams.

The Lakes Region Juniors Volleyball Club, founded and directed by Randy, is also administered by her as “a regional non-profit organization designed to promote healthful recreational activity for young women.” Currently club members come from 23 different area schools and range in age from 11 to 18 years old. Pleased that many of the club members have had successful high school and college careers, Randy is most proud that “so many of our former members have used the passion that we helped to foster, by becoming involved in coaching volleyball.” A good relationship with the women’s volleyball program at the local University of Plymouth, offers an opportunity for collegiate players to begin their coaching careers in the club. This has allowed the club to have an “all-female coaching staff”, a rarity in such an organization.

“Providing positive female role models for the girls in the club while promoting healthful recreational activity and encouraging friendship through athletics is a winning combination.”