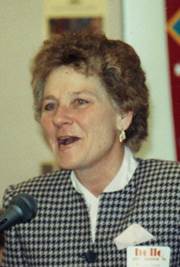 Rena is currently the Assistant Superintendent for the Rockland Public Schools.  She has climbed all the rungs of the ladder from teacher, to coach, to director of physical education, to athletic director, to her current position.

She was very involved with the implementation of Title IX and Chapter 622 regulations, and served as the Rockland Coordinator.  She was a major force in the establishment of equal pay for women coaches in Rockland and , as athletic director, instituted equal practice times as well as equal opportunities for girls’ teams.  Rena served as the Women’s Coordinator or Athletics for the Old Colony League for 9 years and worked to include girls’ track, gymnastics, and soccer as interscholastic sports in the Old Colony League.

During her coaching career, Rena was head coach for field hockey, basketball, and softball.  During her 19 years of coaching field hockey, she has only two losing seasons.  All of her basketball teams played in post-season play, and one of them won the first Southeast Tournament, a tournament which she helped to establish.  She has won two league championships in basketball.

Rena has also been active in MAHPERD, serving as secretary for a term and has presented sessions at the AAHPERD National Convention.