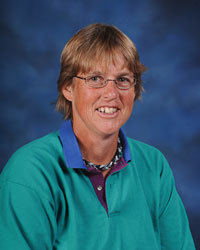 Since graduation from Lydon State College in 1982, Roxanne has been involved in girls’ and women’s sports at all levels from elementary school to college. She has coached and/or officiated soccer, basketball, volleyball, softball, and field hockey.

During her career, Roxanne has been active in the Vermont’s coaches associations for field hockey and basketball, leadership conferences, and the Vermont Association for Health, PE and Dance. She directed the summer girls’ basketball camp and has served on the Lydon area youth soccer board.

Roxanne was inducted into the Lydon State College Athletic Hall of Fame in 2005. “Taking three basketball teams and a field hockey team to the state semi-finals was very rewarding. But my greatest reward is just watching girls participate in athletics. It’s not about winning/losing, but hard-work, self-improvement, and sportsmanship.”