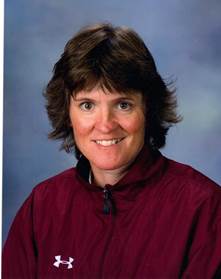 Sally praises her high school and college coaches (Marge Dolan, Patricia K. Brozek, and Elaine Sortino) for being positive female role models and laying a great foundation for her successful athletic career.  They helped groom and teach her “the value of sports, the relationships that are formed, and the lasting friendships made along the way” through athletics.

A UMass graduate in 1986, Sally has been teaching and coaching in North Haven, CT, since 1987.  She received her Master’s in school health from Southern Connecticut State University in 1999.  She is active in AAHPERD, CAHPERD, the CT High School Coaches Association, and the CT Softball Hall of Fame Committee.

Sally has been honored for her coaching success.  She was inducted into the Connecticut Softball Hall of Fame in 1996 and the Connecticut Volleyball Hall of Fame in 1996.  In 1998 she was inducted into the North Haven High School Athletic Hall of Fame.  She was twice named the All Area Coach of the Year for Softball by the NH Register and in 2006 she was the Umpires’ Coach of the Year.  In 2008, her team was the Class L State Champions.

“I love going to work every day and working with the young adults in my classes and the young ladies I have had the privilege of coaching.  I have the best job in the world – teaching physical education and coaching high school softball.”