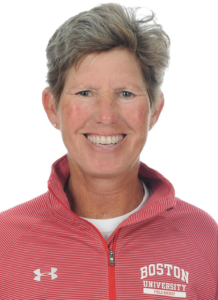 When you took your first job, did you think, “will I be in this career fifty years down the road?

Starting with brief stints coaching at the University of New Hampshire and Bucknell University, Sally landed at Boston University where she has had an incredible career impacting collegiate athletes in so many ways!

Her talent rich program has produced forty-two (42) All- Americans, one hundred and thirty-eight (138) All-Region selections and Twenty (20 ) conference “Player of the Year” awards. The list goes on and on. These are selections made by opposing coaches and the National Field Hockey Coaches Association, not by Sally. This speaks volumes about the quality of skilled players that she has mentored.

Sally in her own right, has received personal honors such as ten (10) “Coach of the Year Awards”, the Boston University Hall of Fame “William French Award” for excellence in the coaching profession and has been inducted into the National Field Hockey Coaches’ Hall of Fame. Typically today’s student-athlete does not enter college playing three sports. In Sally’s case, she played field hock- ey, basketball and lacrosse. She was so impressive that she was selected to the US field hockey team and the national lacrosse team!

Thankfully Sally has shared her talents, expectations ad commitment to others. We are pleased to induct Sally Starr into the Hall of Fame.