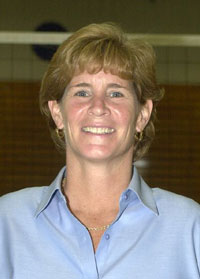 Sandra Hoffman sums up her profession with “I feel I have the best job in the world – coaching!”  After graduating from Springfield College in 1980, Sandra coached soccer, basketball, and softball at Burlington High School.  In 1982 she went to Bentley University to coach volleyball and received her master’s degree in 1990.

At Bentley University, Sandra has been the head women’s volleyball coach and the Assistant Director of Athletics since 1982.  She has also been the director of the New England
All-Star Volleyball Camp since 1987.

Sandra has been honored with a Commonwealth of Massachusetts Citation for sportsmanship and international fellowship for volleyball in 1989.  She has been named Northeast 10 Conference Coach of the Year seven times and was the NCAA Northeast Region Coach of the Year in 1989.

“My greatest rewards have not been in wins or championships, but in mentoring young women, establishing relationships and directing summer camps.”