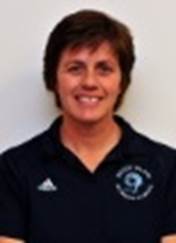 Shelagh has been coaching rowing for over 20 years.  She began at Boston University in 1995, moved to Northeastern University from 1996-2005, and since 2006 has been the women’s rowing coach at the University of Rhode Island.  In 1995 she was the US Junior Women’s coach and in 2014 she coached the US paralympic team.

She has been a successful athlete and coach.  Her teams have won the Atlantic 10 Conference Championship four times at the University of Rhode Island.  She was the Atlantic-10 Coach of the Year in 2007, 2008, and 2010.  Most noteworthy is that Coach Donohoe is the only head women’s rowing coach that is FEMALE in the Atlantic-10.

Shelagh is also in the halls of fame at Keith Catholic High School and UMass/Lowell.  She is a 3-time USA National Team member with 2 silver medals at the World Championships and a 1992 Olympic silver medal.

“It’s great to see the transformation of the women from their freshman to senior years.  I feel I build their confidence through the years they row under me.  The graduating athletes are confident, proud, and high achievers.”