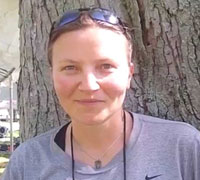 In 2002, Stacey founded the We Can Row – Lansing (MI) program – the first breast cancer survivors’ team to be partnered with a university.  She currently supports the We Can Row – Boston (Women Enduring Cancer Row), partnering women and Boston University in this empowering wellness program.

“Most of my rowing career has been centered around coaching novice rowers.  I take a group of strangers with little or no knowledge of rowing and guide them to become a cohesive and competitive team.  Many of the women I get to coach learn to row in college and transform themselves into the strongest, most confident women they have ever been.”

Stacey is a member of the Women Coaches’ Academy and a Level III US Rowing Coach.  Stacey has been honored while at Boston University as the CAA Coach of the Year (2013) and the Patriot League Coach of the Year in 2014 and 2016.