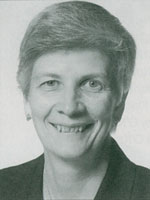 Sue is currently the Associate Athletic Director and head coach for women’s basketball (1976- present) in Williston, Vermont.  She was the first full time female member of the Athletic Department in 1976.  She was a member of the first NCAA Championship Committee for women’s Field Hockey.  Additionally, she served as a member of: the NCAA Division II Regional Basketball Advisory Committee; the NECAC Division II Athlete of the Year Committee from 1983-1998 (chairperson 1985-1987); the Title IX Coordinator at St. Michael’s; and is the Senior Woman Administrator at St. Michael’s College.

Her affiliations include: the ECAC (Executive Committee) and the NECAC (past-president and first woman president).  She is a member of the St. Michael’s Hall of Fame (1995) and the University of Vermont Hall of Fame (1991).

In 1976, Sue took over, organized and guided a 12-game, no scholarship, independent program to a program with a 20-game schedule, fully funded, Division II program.  Her athletes have maintained a 100% graduation rate for 25 years.  During her tenure at St. Michael’s she has coached field hockey, softball, and lacrosse.  The first intercollegiate volleyball program was developed and coached by Sue.  One major program under her direction is the AAU Women’s Volleyball Tournament.