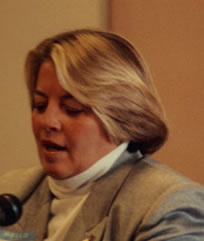 Dr. D’Annolfo is currently the principal of Litchfield High School, Litchfield, CT.  In 1970 she began her coaching career by establishing the women’s sports program in the West Hartford Public Schools.

She coached swimming, cross country, track & field until 1978.  From 1979-1987 she served as athletic director for the West Hartford Public Schools for both the male and female programs.  She worked tirelessly to introduce and maintain equity in the athletic program.

Her various awards speak to her overall success in coaching: 1976 Coach of the Year Award in both cross country and track & field, 1977 National Runner Up Coach of the Year in Track, and the 1978 New England Track Coach of the Year Award.  She was presented the Michaels’ Achievement Cup, given to the high school with the best win/loss record as well and the best drug prevention program for student athletes.  In 1990 she was recognized as the Connecticut Health Educator of the Year. In 1994, she received the Milken National Educator Award and Litchfield High School (where she is Principal) was honored with the National Blue Ribbon Award.

Susie has authored and contributed to many publications, serves as a technical reviewer for five publishing companies, and has appeared as a guest speaker at many schools, colleges and TV programs.