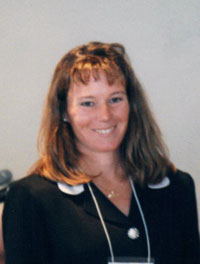 Terri has been a high school field hockey coach for 12 years, 3 as a junior varsity coach and 9 as a varsity coach.  She also works with the field hockey Futures’ Program where she started as an assistant coach, became head coach, and is now the site director.

She has been coach and coordinator of the Nutmeg State Games. She works with young people in grades 3-8 in the Town of Avon, CT.  For 3 summers, she coached at the University of Connecticut field hockey camp.  She is also the coordinator for several off-season indoor leagues and a coach at several USFHA hockey festivals in November.

Her affiliations include the North Central CT Conference, the USFHN, the NFHCA, the CT High School Coaches Association, and the NHSACA.

Her lifetime coaching record is 111-34-17, and her junior varsity teams were undefeated for 3 years.   In 1997, Terri coached the 16 and under team at the National Field Hockey Tournament in Maryland.  Her varsity teams have earned spots in the State Tournament every year; 2 finals, 2 semi-finals, and 3 quarter-finals.

Terri, who holds a Level I USFHA coaches certification (1997) was named the CT Field Hockey Class S Outstanding Coach for 1992 and the Nutmeg Games Coach of the Year in 1992.

She feels that she “wins more when she is able to help her players develop into young ladies by the time they graduate.”  As a coach, she feels “that it is important not only to teach them the skills of the game but more importantly, goal setting, discipline, hard work, team work, team spirit, dedication, and fair play…life values we can teach our players through a positive team experience are so very important.”