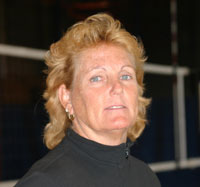 Terry has been involved in sports since the 1970s as a player, coach and administrator.  She has always been involved with gender equity in sports.  At UMass-Boston, one of her goals is to expose as many local high school students to sports as possible and help them realize what sports can do for them.

Terry has an outstanding volleyball playing and coaching background and is a legendary figure within college and US volleyball circles.  As an athlete, Terry Condon played volleyball for the UCLA Bruins where, in 1992, she was named one of the 25 greatest players in UCLA history.  She played for the US National Volleyball Team and the USA Women’s National Team throughout the 1970’s.  She was selected to the USA Volleyball 75th Anniversary Women’s All-Era Team (1949-77) and honored as an All-Time Great Female Player by the US Volleyball Association in 1983.

Terry has been involved with volleyball on the collegiate and national level.  As a coach at Texas A&M, UCLA, and UMass-Boston, she has always set a high standard of success.  Terry conducted many volleyball clinics and an all sports clinic for the Boston City Schools. She developed a plan to work with Dorchester High School to help their students by exposing them to different sports and the college experience.

As an administrator, Terry has worked in the athletic programs of UCLA, Northeastern University, and UMass-Boston.  Currently the Senior Associate Athletic Director at UMass-Boston, Terry makes the gymnasium available for junior volleyball tournaments because she realizes how important a quality facility is to aspiring athletes.