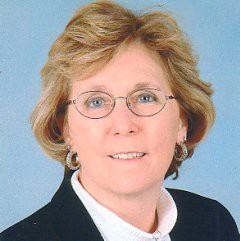 Since 1983, Terry Wappel has served as a leader promoting and expanding quality participation opportunities for girls and women in the sport of golf. Terry’s involvement has ranged from creating an afterschool golf program for elementary school students in the town of Mansfield (MA) to hit golf balls in the school yard, to serving as the President of the Women’s Golf Association of Massachusetts (WGAM).

As 1969 graduate of Boston State College, Terry initially volunteered as an instructor of golf and on-course etiquette as a member of the Willowdale Golf Course in Mansfield. She then served for more than two decades in committee, board, and executive leadership roles as a member of the Foxborough Country Club in Foxboro (MA).

After retiring from a career as an elementary educator, Terry committed to volunteer work with the WGAM, an official representative of the USGA providing information on handicapping, the USGA Rules of Golf, and tournament administration. During her tenure with the WGMA, Terry served as a tournament rules official, committee chair, and president. Many of her roles and responsibilities were directly related to expanding quality participation opportunities for girls in junior golf. In her role as an official for the WGMA’s girls’ travel team, she brought girls from Massachusetts to compete in golf tournaments with girls from the NY Metro and Philadelphia areas. Graduates of WGAM’s junior program who have participated during Terry’s time with the organization include current LPGA golfers Brittany Altomare and Megan Khang.

Most recently, Terry has volunteered as an instructor with the Girls Independent Golf League (GIGL). GIGL is an independent, all-girls, town-based golf league based in Norton (MA) that provides low-cost opportunities for girls of all experience levels. Organizations such as GIGL have become catalysts for recent spikes in the number of girls in the U.S. participating at the junior level, as well as increased representation of girls of color and girls from low-income families.

Terry states that she has “enjoyed her volunteer work over the years as an advocate for junior women and girls.” The impact of her leadership is evidenced in the increased access and quality participation opportunities for girls and women of all ages and ability levels.